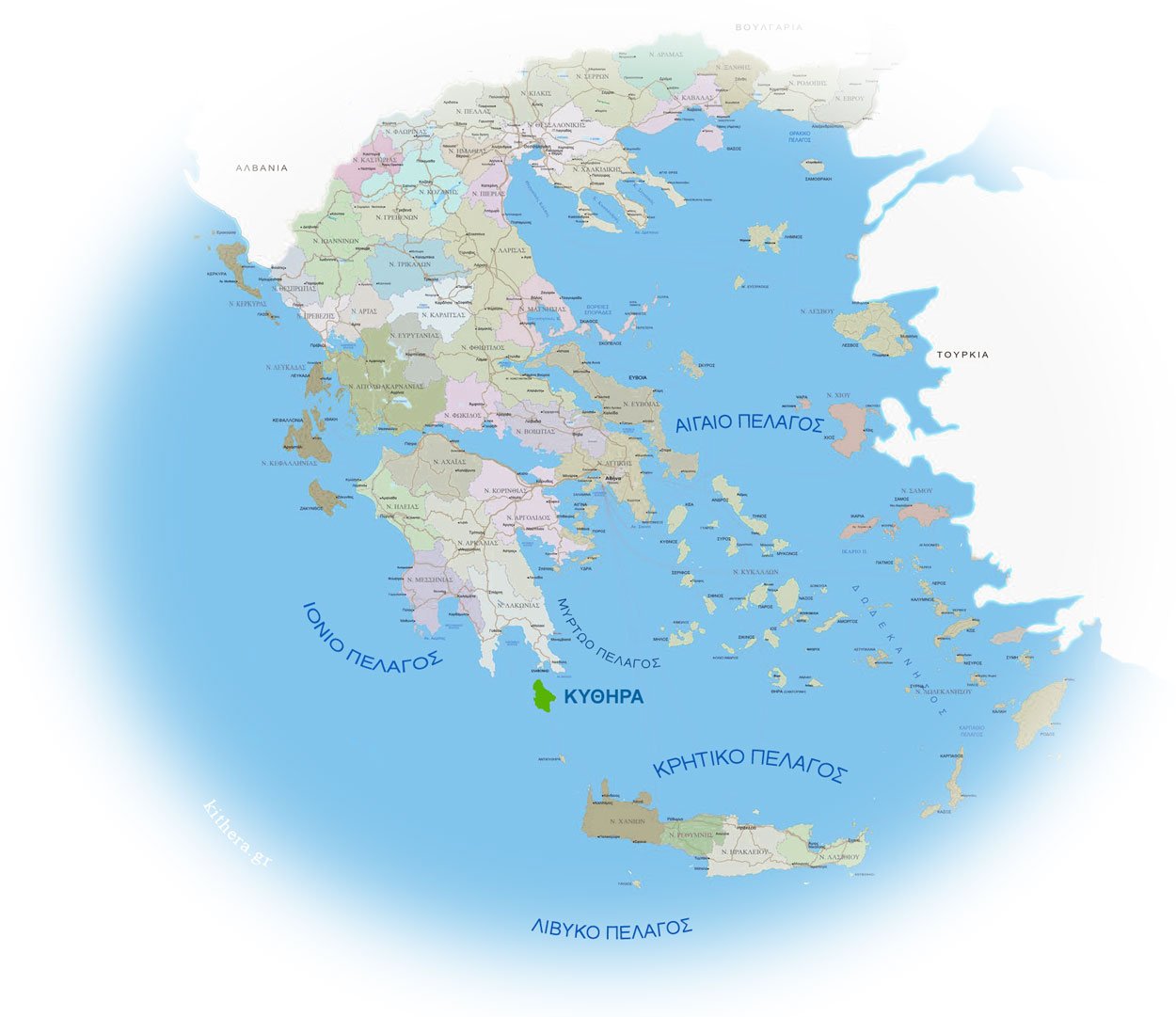 Kythira is located in southern Greece between three seas, south from the Peloponnese and north from western Crete, washed by the Myrtle sea to the east, the Ionian sea to the west and the Cretan sea to the south.
They are 29 kilometers long and 18 kilometers wide. with an area of 277,746 square kilometers, the morphology of the island is a plateau with two main mountain ranges, in the west with the highest Mermiggaris with an altitude of 550 meters, and in the east with the highest Mount Digeni with an altitude of 474 m. These two mountain ranges branch in smaller mountains, while between them there are deep gorges, lagades with rich vegetation and springs with many running waters ending in beautiful beaches of small and large sizes. The island has steep coasts with their length being about 91 kilometers.
Lagades with a lot of water exist near Mylopotamos, Karavas and Mitata, while the other areas rely on wells for water supply. In Mylopotamos there are springs with waterfalls and small lakes, this water in the past was used to power watermills, which today are one of the top attractions in Kythira.
Geographically they belong to the Heptani Islands, and administratively they fall under Piraeus. It is the 15th largest island in Greece and has 64 communities with the smallest being Viaradika which in the old days was one of the largest.

The climate of Kythira is temperate Mediterranean. The average annual temperature is about +20°C and the average annual amount of rain, (lasting about 60 days), is 600 mm, the average cloud cover is 4 and the average wind force is about 3 – 4 Beaufort with prevailing winds from the northeast and westerners. Many times during the Spring, a west-southwest wind called “provence” is observed, which gathers low clouds creating fog, where special attention is required of the sailors. Snow is rare as is the temperature below -4°C.

The inhabitants are mainly farmers and employees, but with the increase in tourism and the arrival of semi-permanent settlers, the center of gravity has shifted towards tourism businesses and construction. Main agricultural products are oil and honey. Touristically, the island is developing. A contribution to its good reputation is the fact that its residential development takes place in a controlled manner without altering the local rhythm.